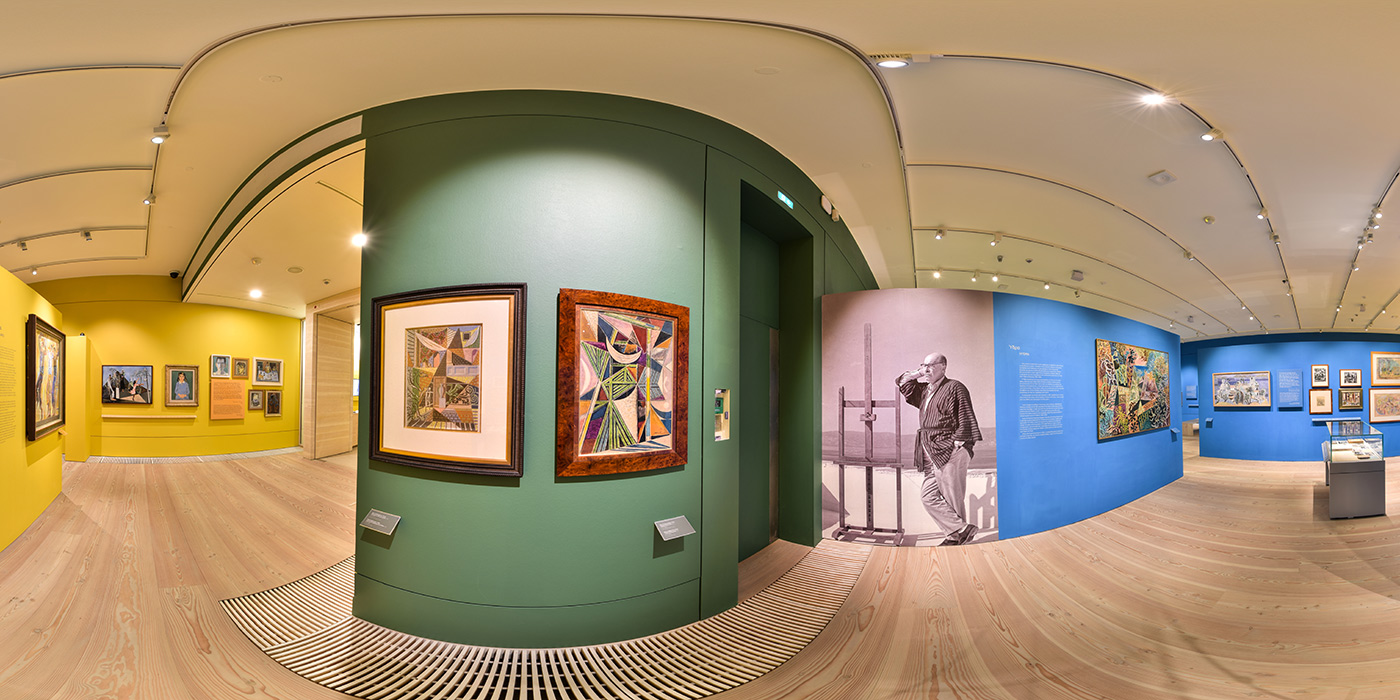 The ‘Charmed Lives in Greece’ of three great artists is presented for the first time at the A.G. Leventis Gallery

On February 24, the art lovers of Cyprus will be able to enjoy a fascinating retrospective of the life and work of three important artists of the 20th century. The exhibition ‘Ghika, Craxton, Leigh Fermor: Charmed lives in Greece’, presents the friendship of three significant figures, the artists Nikos Hatzikyriakos-Ghika (1906-1994) and John Craxton (1922-2009) and the writer Patrick Leigh Fermor (1915-2011), from the early years of their acquaintance in the mid-1940s to the end of their lives. Through the display of works of art, extracts from texts, photographs, letters, manuscripts and publications, we follow their relationship and their artistic and literary careers, with their love of Greece always a common denominator. As well as giving a chronological account, the exhibition plays on the theme of the places which inspired them – Hydra, Kardamyli, Crete and Corfu – and where they found hospitable settings to live and create.

Nikos Ghika and John Craxton first met in London in 1945 and a year later Craxton visited Greece; prompted by Patrick Leigh Fermor, he stayed and painted with Lucian Freud on the island of Poros. After traveling around the country, he soon realised that Greece should become his home base. Similarly, Leigh Fermor, who knew Greece from his earlier travels, would choose the southern Peloponnese for his own home in 1960.

The enduring friendship amongst the three men lasted for over fifty years. Greece was an integral part of their relationship, as well as an inspiration apparent in every aspect of their work. The friendship between them was sealed in four particular areas which also became a source of artistic inspiration: Hydra, Kardamyli, Crete and Corfu.

The exhibition will be launched at the A. G. Leventis Gallery in Nicosia (February-May 2017), then at the central building of the Benaki Museum in Athens (June-September 2017) and finally, at the British Museum in London (March-June 2018).

This exhibition gives us an insight into their personalities, their interrelated work and the magical Greece of their lifetimes. It is dedicated to three great artists who honoured the country that so inspired them though their unique oeuvre. The exhibition will be inaugurated by the High Commissioner of the United Kingdom in Cyprus, Mr. John Christopher William Kidd and H. E. the Ambassador of Greece Mr. Ilias  Fotopoulos and will be open from February 24th until the 22nd of May at the Temporary Exhibitions Hall of the A. G. Leventis Gallery.

The curatorial team consists of: Evita Arapoglou (author on Ghika, Curator of the Greek Collection at the Leventis Gallery), Ian Collins (author, Craxton’s biographer and art executor), Sir Michael Llewellyn-Smith (author, historian of Greece and former British Ambassador to Greece) and Ioanna Moraiti (Head of the Archive at the Ghika Gallery, Benaki Museum). The exhibition is coordinated by Demetra Theodotou Anagnostopoulou (Deputy Director of the A. G. Leventis Gallery).

Nikos Ghika and John Craxton first met in London in 1945, and a year later Craxton visited Greece; prompted by Patrick Leigh Fermor, he stayed and painted with Lucian Freud on the island of Poros. After traveling around the country, he soon realised that Greece should become his home base. Similarly, Leigh Fermor, who knew Greece from his earlier travels, would choose the southern Peloponnese for his own home in 1960.  Apart from Athens and London, Hydra, Kardamili, Crete and Corfu played a key role in their relationships, being also the locations they chose to live.

Ghika’s home in Hydra – which had hosted such artists and writers as Henri Cartier-Bresson, Le Corbusier and Henry Miller – would be the place for numerous stimulating encounters for both Craxton and Leigh Fermor, as well as for many other friends. In fact, Leigh Fermor lived there for two years and wrote part of his book Mani. Ghika’s work was strongly influenced by the environment of Hydra which was pictorially transferred in his Cubist compositions. John Craxton, also stayed in the mansion in 1959, decorated the wooden surfaces with Ghika and of course painted various works inspired by the beauty of the island’s landscape.  Sadly, two years later, it was Craxton who was meant to rescue everything that was saved by the fire which completely destroyed this house. The correspondence of this period confirms a deep friendship, expressed by encouraging words ‘…maybe in some strange way it was a sign from the gods to move on to other places. After all there is something optimistic about the things that are left: blank canvases, a studio lamp, rolls of canvas paints, inks, photos…’.

Patrick Leigh Fermor and his wife Joan Rayner, discovered a beautiful area in Kardamyli in the Peloponnese and built during the 60s a house over an idyllic cove with spectacular views, thus realising their dream for a permanent home in Greece. The magnificent house –with its arched loggia, the courtyards, and above all the atmospheric interior with the works of art and the endless collections of books- was visited by numerous friends, among them many writers and artists. Ghika and Craxton were of course regular guests and many of their works were inspired by the environment of the Kardamyli home. This house was later bequeathed to the Benaki Museum, after the suggestion of Leigh Fermor’s friend, Tzannis Tzannetakis.

John Craxton chose Chania as his Greek base and his charming small home overlooking the old harbour received a great number of local and international visitors. His studio was where many of his wonderful paintings were created, vividly reflecting the brightness of the Cretan landscape, the characteristic local figures and the joyfulness of everyday life. An admirer of Byzantine art, of El Greco, of frescoes in old churches found in the Cretan countryside, Craxton remained passionate about his new homeland throughout his life. Ghika was also inspired by the Cretan world in the mid ’50s and created some very characteristic compositions.

Ghika and his wife, Barbara Hutchinson-Rothschild, transformed in the early 1970s an old house in an olive grove on Corfu and transformed it into a small paradise and another sanctuary for the three friends and their circle. Drawings and thoughts by Ghika on the reconstruction and decoration of the house were complimented by Leigh Fermor’s sketches and ideas for the landscape design of the gardens. Friends actors, writers and artists would accompany them in the summer and share pleasant evenings with long discussions and reciting described in their writings. And of course, the beautiful landscape of the Ionian island became the subject of many of Ghika’s works.

ClientA. G. Leventis Gallery
Skills360° Virtual Tours
TagsCyprus, Gallery, Museum
Share
PrevNext
We use cookies to ensure that we give you the best experience on our website. If you continue to use this site we will assume that you are happy with it.OkPrivacy policy